And so, with depressing predictability, some nutjobs, egged on by a few radical/cynical clerics, have firebombed the home office of the U.K. publisher who plans to put out The Jewel of Medina. This is the novel that was dropped by its U.S. publisher for fear that some nutjobs might do something crazy – like firebomb their offices.

Just as depressing is the thought that, yet again, a book that is, in all likelihood, a middlebrow snorer, has become a symbol of free expression.

To be glibly philosophical about it, it's some small consolation to know there are people out there who think books are still important enough and dangerous enough to be worth throwing Molotov cocktails at.
Posted by nathan at 6:33 AM 1 comment:

This coming Sunday, I'll be doing a thing at the Toronto edition of Word On The Street in Queen's Park. Not entirely sure what I'll be doing yet – some combination of reading and genial blah blah blah, I'm guessing. I'll try to keep it lively, whatever it is.

What I do know – and what I'm more excited about, frankly – is that Alex Lukashevsky will be reforming The Weeklongs (one time only!) to perform the odd little piece of music he composed specifically for the launch of my novel, lo those many months ago. He has also arranged a version of one of his own songs to perform.

This is all happening at 4:30 on the EYE Weekly stage at the east side of the park. Come one, come all. There'll be books for sale, as well as (I think) copies of Alex's most recent CD.

Speaking of Alex, Owen Pallet (a.k.a. Final Fantasy, a.k.a. the guy who done did the strings for Arcade Fire, etc.) just released an EP of six of Alex's songs, all performed by a full-on orchestra. The results are a little surreal, though I haven't yet heard the whole thing. I think it's great for Alex, and I hope it leads more people to his stuff, but I worry that the orchestral versions remove some of the tight corners and pointy elbows that are integral to the songs. Alex's music can be a hard sell because it revels in its musicness to an occasionally uncomfortable degree. Even having listened to his stuff for years (including a brief period finding myself musically way over my head playing drums in his band, Deep Dark United), there's still a few a few floors on his particular tower of song that I tend to bypass. But that's the point: it doesn't all have to taste like chicken. Alex doesn't present fully formed musical vignettes (however great that can be when done right) or multiple variations on a single theme (ditto), but rather turns the whole process – songwriting, performance, recording – into a kind of continuous workshop, with all the attendant hazards. (I am furiously resisting words like "journey" and "search" and "exploration" due to the anal-clenching that occurs just typing them, but there it is.) Too much Cassavetes can leave you yearning for something a little more composed, idiomatic, and singular in intent, but there has to be room for the kinds of raw power and engagement that only occurs when you take off the leash, or the apron strings, or whatever metaphor of restraint you prefer. And some of Alex's shows – solo and otherwise – are among the most wig-flipping musical performances I've ever seen.

Which is all to say that you should come out Sunday afternoon. There'll be balloons for the kids.

ADDED: Alex and I both pick a favourite in this week's EYE Weekly.
Posted by nathan at 6:25 PM No comments:

The New Orleans Times-Picayune reports that state Rep. John LaBruzzo (R) said yesterday that “he is studying a plan to pay poor women $1,000 to have their Fallopian tubes tied.” LaBruzzo worries that people receiving food and housing assistance “are reproducing at a faster rate than more affluent, better-educated residents.”

I actually love it when this kind of thing is said publicly. It's like when they dredge a river: you get to see the noxious shit that is usually covered over.
Posted by nathan at 6:16 PM 1 comment:

Three reviewers in search of a point

No, fictional people absolutely must possess at least a spark of hope and possibility, even if it's ultimately extinguished. Novelists must provide characters with this trait not out of any sense of contrived or sentimental optimism, but out of respect for drama.

To live with any chance of sparking interest from others, even in a fictional sense, folks must believe they've got a chance to make their own future.

No, they just have to be interesting to read about, period. Who – aside from maybe Oprah – gives two shits whether a character is full of hope? I don't remember reading The Metamorphosis and thinking, "well, as long as Gregor believes he can make it as a bug..."

2. J.C. Sutcliffe on Joseph Boyden's Through Black Spruce in The Globe and Mail:

Through Black Spruce feels rushed, more sketchy and less careful, sentence by sentence, than Three Day Road. Although it is not the best novel that Boyden could have produced, its shortcomings are forgivable. Both novels demonstrate that there is much more to modern Anishnabe life than the clichés of alcoholism and the unsporting use of technology to make the most of traditional hunting rights. Even if the people who most need to hear this message are too busy riding their own ATVs to their high-tech deer hides to actually read Boyden's books, their children will no doubt come across them at school as this author becomes part of the canon.

To recap: the book's not all that well written, but that's okay, because, unlike this review, it doesn't propagate certain cultural clichés. And therefore kids should have to read it.

3. My personal favourite – Rob Salem on Ghost Town in the Star:

Téa Leoni's misguided widow is something else entirely, in her case unintentionally unlikeable – the victim of poor writing and a needlessly needy, poorly conceived and inconsistent character.

It is only Leoni's irresistable charm that makes the girl even remotely sympathetic – just as, conversely, her mere proximity as Adam Sandler's neurotic wife made Spanglish somehow bearable.

I swear, she just gets better and more interesting and more luminously beautiful with the passing years.

You are moved to ask the same question you ask in real life – what on earth was her husband (David Duchovny, he of the sex-addiction rehab) thinking?

Never mind that, what on earth was Rob Salem thinking? Uh, never mind – I think we can guess.
Posted by nathan at 6:28 PM 2 comments:

From Anthony Powell's The Valley of the Bones, here's the narrator Jenkins on literature's limited reach:

I was impressed to the ten thousandth time by the fact that literature illuminates life only for those to whom books are a necessity. Books are unconvertible assets, to be passed on only to those who possess them already.

This is the kind of thing that can sound like smug elitism, sombre resignation, or merely a sober view of the facts, depending on your mood.

It's actually all three.
Posted by nathan at 4:33 PM No comments:

Handmade sign being held by a young panhandler near the (former?) CityTV building:

"Voldemort turned me into a hobo. Need money for wizarding school."

Thus endeth my likely engagement with this beyond-depressing election until the day I dutifully drag my ass to some local gym to once again mark my ballot for whatever no-profile no-hoper the NDP has decided to drop into my riding this time.

(Actually, the local candidate is not quite so no-profile this time. Still...)
Posted by nathan at 2:30 PM No comments:

This is odd and unexpected, but very flattering: someone actually sought out the exact intersection on the cover of my book and sent me the photographic evidence.

The intersection is in Dorchester Sackville, New Brunswick. (And, as some of you may know, has a "Stop/Arrêt" sign that had to be unilingualized for the cover.)

(And there never was a pink house there. Magic!) 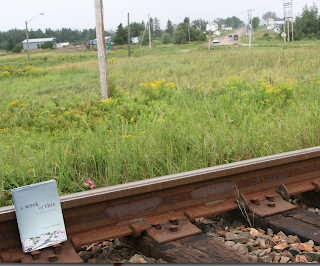 (Many, many thanks to Yvonne D. for this.)

My review of Rawi Hage's Cockroach is in this week's Ottawa Xpress.
Posted by nathan at 1:45 PM 1 comment: