A novelist, short-story writer, poet and critic, Updike was considered one of the most important figures in postwar American literature.

Who's going to break the news to Nicholson Baker?

Get on the snake

Don't know what you are doing tonight, but here's what I am doing:

This Is Not A Reading Series presents the launch of Shaun Smith's SNAKES & LADDERS with an evening of games!

This Is Not A Reading Series presents an all-ages evening of fun and games to launch Shaun Smith's YA novel Snakes & Ladders. First, Quill & Quire Books For Young People editor Nathan Whitlock will interview Smith while they play a giant version of Snakes and Ladders.

Then you can grab some chips and dip and settle in to play classics games like Scrabble and Clue, as well as groovy new games (courtesy of Scooter Girl Toys) like Blokus, Qwirkle and Wacky Stacky. Games Masters Shannon Abel and Myrocia Watamaniuk will be calling out Twister moves and settling disputes at the Scrabbleboard. ­ A This Is Not A Reading Series event presented by Pages Books &
Magazines, Dundurn Press, Gladstone Hotel, EYE WEEKLY, Take Five on CIUT,
and Scooter Girl Toys.

Come one, come all. And bring children.
Posted by nathan at 10:24 AM No comments:

Poppy vs. The Ram

I'm doing a lot of reading/writing for money at the moment (thank god), but one thing I want to do when I'm through some of that is write up something on this humble site (that is, for free) comparing Mike Leigh's Happy Go Lucky and Darren Aronofsky's The Wrestler. Specifically, I want to look at how the two films work as ostensibly realistic character studies that contain much that is highly stylized, sentimental, and clichéd.*

And, having laid that, I want to make clear which movie makes schmaltz work, and which just about gets sunk by it. (Hint: I love just about everything Mike Leigh has ever done except Vera Drake, and just because a film has a scene in which a man gets stapled repeatedly in the chest doesn't mean it isn't schmaltzy.)

Who knows? Maybe I can write this one for money, too. In the meantime, go see both movies (if you haven't already) – they are both more than worth seeing. Not as a double-feature, though.

[Just because I've got the weight of the world and not a lot say about it at the moment, here's a review I wrote of Haruki Murakami's running memoir that was originally intended for the Toronto Star last fall, before the book section there started shedding pages. Thank you to the Star and Dan Smith for letting me reprint it here.] 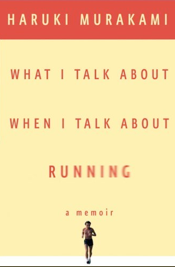 What I Talk About When I Talk About Running Haruki Murakami, translated by Philip Gabriel Bond Street Books/Doubleday Canada $27.95

Despite the plainly informative, Carver-biting title of Haruki Murakami's newest book, the hardest thing for a reader to do is decide what it's actually about. Ostensibly, it’s a kind of memoir of the globally popular Japanese author’s obsessive dedication to long-distance running, a sport he took up in the early eighties after selling his successful jazz bar and starting out as a novelist. (He felt he needed the exercise.) In the introduction, he admits that he has been trying to write this book for ten years without success. “Running is sort of a vague theme to begin with,” he writes, “ and I found it hard to figure out exactly what I should say about it.” On the evidence here, it would appear he never did figure that one out.

The connections between novel-writing and marathon-running are fairly obvious: the loneliness of the act, the single-minded discipline and sheer will power required, the need to best your own previous efforts, and so on. Murakami returns repeatedly to these themes, but never with any central point in mind or with any sense of enlargement. In fact, there seems to be no organizing principle at play here at all, so we are left with accounts of Murakami’s various marathon runs, detailed run-downs of the training he does before each, and only the barest of glances at the one activity we can only assume holds a higher place of importance in his life than running: writing.

The slackness and seemingly off-the-cuff nature of the book would not be such a problem were the writing itself vivid or revelatory or simply interesting enough to draw us along. Instead, we get only the banal ramblings of a writer who is either unwilling to reveal the kind of complexity that could be more usefully channelled into fiction, or – scary thought – who is genuinely this dull.

Consider these nuggets of wisdom:

“Forgive me for stating the obvious, but the world is made up of all kinds of people.”

“Some people can work their butts off and never get what they’re aiming for, while others can get it without any effort at all.”

“You have to wait until tomorrow to find out what tomorrow will bring.”

Etc., etc. Elsewhere, the music of the Lovin’ Spoonful is described as “sort of laid back and never pretentious,” and there is an admission that being old “feels really strange.” If this is how casual his published prose can get, I shudder at the thought of the man’s e-mail style – does he even bother with words, or does he just drag one sleepy arm across the keyboard and hit “Send”? It’s possible that some of this can be laid at the feet of the book’s translator – possible, but not probable, given the abundance of Hallmark-worthy sentiment crowding the book.

Murakami says that he is often asked what he thinks about as he runs. His answer: “I don’t think much of anything worth mentioning.”

As with running, so with writing about running, it would seem.
Posted by nathan at 8:02 AM 1 comment:

Goodbye to all that

The verbal gaffes of the outgoing American president are the lowest hanging fruit on the humour tree, and I tend to believe that it's a bad move to make genuinely dangerous people seem merely buffoonish (see: Colbert Show, The), but I have to admit this is pretty funny (and satisfying, in a "about to become one very disappointed mushy default liberal" way):

Posted by nathan at 9:54 AM No comments:

For someone who used to feel all smug and superior about riding my bike through rain, snow, and sleet, I've been doing a stupid amount of driving lately. The only consolation, aside from being warm and dry and superior in a completely different way, is the amount of music I've been listening to without much distraction.

ADD TO THAT: Wale's The Mixtape About Nothing, the best Seinfeld-themed hip hop ever. (And I was never even all that crazy about Seinfeld...)
Posted by nathan at 4:19 PM 2 comments:

Death if necessary, but not necessarily death

Odd quote in Roy McGregor's column in Saturday's Globe and Mail about the death of young hockey player Don Sanderson:

Team Canada head coach Pat Quinn, no stranger to tough and rough hockey, said it was "a terrible thing to happen" and had no idea "how hockey will look on this sort of thing."

"There's no place for death if it can be avoided," Quinn said. "I don't know what the right answer is."

Posted by nathan at 3:52 PM No comments: