The Pleasures and Sorrows of Work by Alain de Botton

My review of de Botton's new book in the Toronto Star.
Posted by nathan at 3:37 PM 1 comment:

A hilarious, counter-intuitive take on Transformers: Revenge of the Fallen (which I will end up seeing, eventually, for free, if I can, because my son will insist, though even he admits that the first one was pretty awful):

Transformers: ROTF has mostly gotten pretty hideous reviews, but that's because people don't understand that this isn't a movie, in the conventional sense. It's an assault on the senses, a barrage of crazy imagery. Imagine that you went back in time to the late 1960s and found Terry Gilliam, fresh from doing his weird low-fi collage/animations for Monty Python. You proceeded to inject Gilliam with so many steroids his penis shrank to the size of a hair follicle, and you smushed a dozen tabs of LSD under his tongue. And then you gave him the GDP of a few sub-Saharan countries. Gilliam might have made a movie not unlike this one.

And the true genius of Transformers: ROTF is that Bay has put all of this excess of imagery and random ideas at the service of the most pandering movie genre there is: the summer movie. ROTF is like twenty summer movies, with unrelated storylines, smushed together into one crazy whole. You try in vain to understand how the pieces fit, you stare into the cracks between the narrative strands, until the cracks become chasms and the chasms become an abyss into which you stare until it looks deep into your own soul, and then you go insane. You. Do. Not. Leave. The Cabinet.

Posted by nathan at 9:44 PM No comments:

Got 99 problems but the beach ain't one 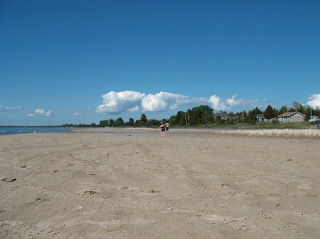 This week in monkey sex, from Time magazine:

According to the paper, "Payment for Sex in a Macaque Mating Market," published in the December issue of Animal Behavior, males in a group of about 50 long-tailed macaques in Kalimantan Tengah, Indonesia, traded grooming services for sex with females; researchers, who studied the monkeys for some 20 months, found that males offered their payment up-front, as a kind of pre-sex ritual. It worked. After the females were groomed by male partners, female sexual activity more than doubled, from an average of 1.5 times an hour to 3.5 times. The study also showed that the number of minutes that males spent grooming hinged on the number of females available at the time: The better a male's odds of getting lucky, the less nit-picking time the females received.

The article pushes the "monkey whore" angle, but this just sounds like a case of the nicer males getting laid more often. All the same, let's hope Hitchens doesn't see this one.
Posted by nathan at 10:55 AM 1 comment:

Here's the interview I did for Open Book Toronto with Rosalind Porter, senior editor of Granta magazine.

Note how I edited out all my actual questions, most of which were pretty pedestrian. It was done out of necessity in this case, but in general, I hate reading interviews in which the interviewer can't seem to stay out of the way. Case in point: the Jhumpa Lahiri interview with Mavis Gallant in the very issue of Granta Porter talks about. More on that interview later...
Posted by nathan at 4:24 AM No comments:

Here's a profile of beyond-notorious Toronto booker Dan Burke that ran in Sunday's Star. I encountered Burke a few times back in my band days, and especially during the period when I pretended to play trombone for The Deadly Snakes. (Photo at right.) I was always a little half-assed about playing music and rarely did any organizing and such, so I never had many direct dealings with the guy.

However: anecdote time – gather 'round kids! Years ago, a friend roped me into playing drums as part of a made-up opening act for André Williams at the El Mo. He and I and a guy named Chris Isom, who played amazing blues guitar and whose father, I think, was Larry King and David Letterman's heart surgeon – not sure how that's relevant, but there it is – worked out a set list in the cab on the way over. Burke was not impressed by the fact that we needed to borrow equipment (especially, um, drums), and went on and on about "fucking amateurs" and the like. For whatever reason, we were actually pretty good – sort of a knock-off Flat Duo Jets, or proto-White Stripes, if you will – and Dan loved us, going so far as to come and sit on the front of the stage to watch. He tried to book us in for more shows, but Isom was moving back to New York, and I thought we would never pull it off so well again, so why bother?

End of story. My life is a series of near-misses and shrugged-0ff chances. (Hence the kind of fiction I write.) Now scoot – grampa needs a nap.
Posted by nathan at 4:03 AM No comments:

Not sure this guy would like the idea of his own tragic death being the occasion for a Spinal Tap reference: 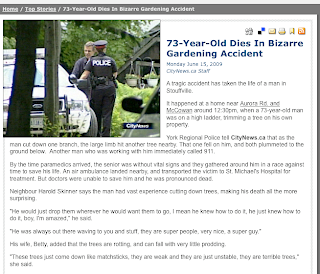 But then, I don't really think that the end can be assessed as of itself as being the end, because what does the end feel like? It's like saying when you try to extrapolate the end of the universe: you say, if the universe is indeed infinite, then how – what does that mean? How far is all the way, and then if it stops, what's stopping it, and what's behind what's stopping it? So, what's the end, you know, is my question to you.
Posted by nathan at 5:25 PM No comments:

I have nothing to say, and no time to say it in, so let me just point out that this album is still in that small group of albums I would want with me on desert island equipped with a stereo system and a power source.

Writing about jazz is the worst kind of literary abuse (unless your name is Philip Larkin), so I won't try to lay out why the record is so great. Just know that it is, k?
Posted by nathan at 8:45 PM No comments:

I don't know about everybody, but I'm working for the weekend, at least 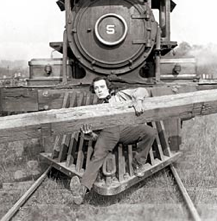 Welcome, welcome – have some whine:

In addition to my day job, which is unusually hectic right now, I have a review of the new Alain de Botton book due, I just finished a short books article for Fashion magazine yesterday, I am in the middle of editing a wrestling memoir (!), I am interviewing a lit-magazine editor this afternoon, and my lowly second novel picked this moment to demand daily, break-of-dawn labour (and I am abiding, mostly happily).

Plus: my son's baseball team seems to play every other night, and my daughter is continuing her descent into full-on hellion status.

This would all be just fine, were I not, at heart, a lazy goodfornothing who would rather lie around and re-read Kingsley Amis novels all day.

Was it not Huey Lewis (and his News) who once sang, "all I need is a couple days off"?

Wise words, Mr Lewis, wise words.
Posted by nathan at 6:42 AM No comments: