An adult raccoon has spent the entire day on the roof of the building across from mine, snoozing and licking its crotch.

You notice such things when you spend most of your day in front of the computer, shovelling word-coal into a very slow-moving novel-in-progress.

One other thing I've been doing is putting together a grant application for the Canada Council. (Hey, it's free money.) Given the odds against my seeing dollar one from that institution, and the difficulty I've had in making said novel-in-progress sound like something that more than eight people will want to read, I may as well have spent my day snoozing and licking my own crotch, too.
Posted by nathan at 5:41 PM No comments: 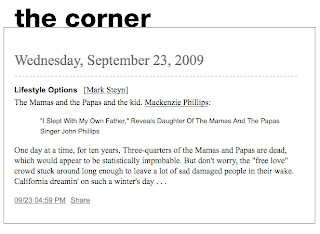 "At least all Mama Cass choked on was a ham sandwich..."

Now here are the differences between Steyn's "jokes" and mine:

- I make no effort to tack on some kind of cultural-moral tut-tutting so as to partly disguise the fact that I am making sniggering comments about a situation that's pretty awful all around. (In other words, I just go ahead and eat my cake.)

- My joke actually has the structure of a joke, and is not merely the throwing out of semi-relevant song lyrics and TV show titles in the hopes of maybe landing on "trenchant."

- I have not advocated for an illegal and immoral war, manipulated statistics in order to foment racial paranoia, dismissed human rights abuses, acted as a lapdog to various authoritarian elites, etc, etc, so moral superiority is at least an option for me.

- My joke is kind of funny (or in the neighbourhood thereof).
Posted by nathan at 11:54 AM 4 comments:

My parked car got side-swiped last night while I was at the announcement for the Amazon.ca First Novel award.

My own first novel wasn't even nominated for the award, so the dinging seems a little gratuitous. Some people really hate literature. If I find the guy who did it, I'm getting Yann Martel to start sending him used books – that'll show him not to piss off a writer.

I had to go to a Collision Reporting Centre out at Islington this morning. Here's a dramatic re-enactment of that visit:

No no no, they were very friendly and helpful. And the best part is that someone witnessed the side-swiping, got the offending license plate #, and left me a note, offering to appear as a witness. Even the cops said the note-leaver was a saint.
Posted by nathan at 9:51 AM No comments:

Before Crank 2 came out, I spent some time trying to defend my love of the first one to a friend of mine. I posited that it was somehow so nihilistic and cynical that it goes right out the other side and ends up oddly innocent.

This review of #2 makes the same point about the sequel (which, incredibly, I haven't yet seen):

And while it’s true that, if you isolate any single scene, the film is truly disgusting and reprehensible, taken in toto, there is a certain amount of … I don’t know if “innocence” is the right word, but close enough – innocence to it all. Or charm, maybe. The sum is less offensive than the parts. It’s just too damn stupid to be truly evil, too goofy and unhinged to truly offend.

Posted by nathan at 1:47 PM No comments:

I saw Ellen Page on College Street near Kensington Market the other day. She looked like a surly high school student – the kind that, immediately upon reaching the age of 14, goes all Holden Caulfield-at-H&M, chopping the hair, losing the makeup, and oiling up her eyeballs for a good four or five years' worth of contemptuous rolling.

But I guess that's her thing. No offence meant.

Speaking of troubled/troublesome teenagers, there's this, which makes me feel young again, in both good and bad ways:

Nice to see the early solo work of Peter Gabriel finally getting some indie respect...
Posted by nathan at 4:07 AM No comments:

I have a fairly puffy piece about the IFOA's thirtieth anniversary up over at Open Book.
Posted by nathan at 12:54 PM No comments:

The good people at Driven magazine, for which I serve as fiction editor, have asked me to become the content-monkey for their web site. Starting today and continuing on until civilization collapses or they get tired of me, I'll be putting something up there every weekday. There'll be discussions of culture, politics, art and the rest of it, links to odd/interesting things around the weboverse and beyond, original short-short fiction (not by me), the occasional review of something, and probably a whole lot of the kind of hoarse chortling that is already the defining feature of this here blog.