The Last Man on Earth

I've been curious about it for a while, but I finally got a chance to watch The Last Man on Earth, the 1964 film starring Vincent Price that was the first film adaptation of Richard Matheson's novel I Am Legend, later remade as The Omega Man and, well, I Am Legend. (I think Ridley Scott tried to make a version with Arnold Schwarzenegger....)

Given the presence of Vincent Price, the year of the movie, and the fact that my wife bought it at a dollar store, I wasn't expecting a whole lot. It's isn't exactly cinematic gold, but I ended up being impressed. Being very much a neophyte in the land of horror movies (and zombie movies in particular – though the original Dawn of the Dead is one of my favourite films, period), I probably should have known how many narrative and visual motifs were taken from this one. I knew Romero was inspired by it to make Night of the Living Dead four years later, but the lifting goes a lot deeper. The opening shots, for example, are very close to the opening of 28 Days Later. Empty city, cars on the sidewalk, bodies everywhere, etc. The biggest lift is the overall tone, however. Unlike Omega Man, and like all the genuinely great zombie movies, this isn't man vs. ghouls, this is man vs. the patently obvious fact that he is fucked. There's not a single moment of levity in the movie. (Not intentional, anyway – like I said, it's not cinematic gold.)

Interestingly, Price doesn't camp it up at all here. Maybe one semi-demented laugh, but it's germane to the character and story. And there are at least two genuinely creepy moments.

It's also pretty unrelentingly brutal, sometimes even gratuitously so. It has no narrative rhythm, just lurching from awful thing to awful thing, and feels about twice as long as it is. But still, it's miles above Omega Man, and on some levels (none of them technical, obviously), just as good as I Am Legend. It's a clumsy movie, but it feels oddly more clear-eyed than the Will Smith one. A lot more cold-blooded – the ending is irredeemably bleak, and has nothing to do with Bob Marley.

There you go. Happy halloween, all.

Posted by nathan at 6:30 AM No comments:

How Fiction Works by James Wood

My review of James Wood's latest in the Toronto Star.
Posted by nathan at 5:12 AM No comments:

The novel just got reviewed in Prairie Fire magazine:

Though his prose is uncluttered and straightforward, he breathes fresh narrative life into the most mundane details ... His dialogue, often spiced with sarcasm, is bang-on ... There are those readers who will balk at a book like this, saying, "I live domestic realism every day. Why would I want to read about it?" Which explains the popularity of fantasy. But, for those who don't flinch at honest portrayals of the way we live, this is as good as it gets.

Posted by nathan at 8:16 PM No comments:

I can read, I can talk - UPDATED

Just a reminder that I'll be bigshotting it at this year's International Festival of Authors.

Here's where to find me:


ADDED: As part of their IFOA forecast, EYE Weekly gives me the nod as the "Best New Local Reader" (and sticks my big, bald head at the top of the article).
Posted by nathan at 7:15 PM No comments:

Blast from the present

Here's something: a homemade video by an old friend of mine, J. Ball, aka Hopeful Monster. Along with the ultra-lo-budget shots of lava lamps, space cartoons, and J himself songing along with his own sing, there is footage from one of only two-ever shows by the Fat Horses, a country-gospel band that J. put together nearly ten years ago. At around the 2:20 mark, you can spot yours truly behind the drum set – with a full head of hair, no less. I didn't even know this footage existed.


One great thing about that footage is that you can see what the Gladstone Hotel ballroom in Toronto looked like before it got hipified.

(Oh, and for CanRock trivia buffs, many of the people on stage went on to play much bigger rooms than the Gladstone, in bands like Broken Social Scene, Deep Dark United, Old Soul, and the Lullabye Arkestra. The horn section you see is now Feist's horn section, I think).
Posted by nathan at 5:04 PM No comments:

I hate it when good bands do this. (The performing part, not the reissuing part, which can be great, if it isn't treated as a mere cash-grab.) Beyond the fact that you are supposed to be musicians, not self-revivalists, it just feeds into the Classic Album mentality that freezes art into place and panders to middle-aged boys with static tastes and cash to burn.

Subcontract it all to a cover band, if you just need the cash.
Posted by nathan at 8:10 AM No comments:

Pleased to meet me [UPDATED] 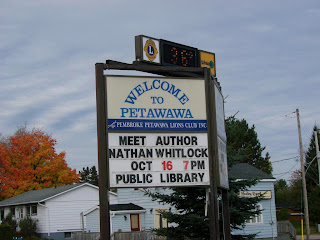 
[Spelling fixed. That's right: I misspelled "whoa." I really did.]


UPDATE: one of my older brothers has sent me the correct version of the sign... 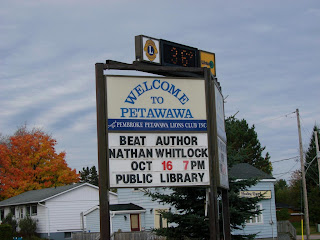 Here's something I found buried deep in my computer. I don't remember the context – I'm not even 100% sure I wrote it. I think I was trying to imitate some of the things Ken Sparling wrote for Gordon Lish's The Quarterly from way back. (Or maybe this is something by Sparling I wrote out, who knows?)

The only thing I can say is that I must have written it when my own first kid was about a year-and-a-half old, maybe two. That puts this at about eight years old. I can also say that I didn't follow my own advice.

I think it at least proves that I've always been a bit of a prick, only now I have a blog to demonstrate this publicly.
Posted by nathan at 7:23 AM No comments: