Over before it began

Anyone notice a problem here? 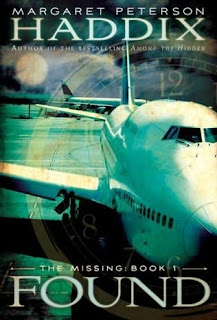 Having just plowed through a pile of surprisingly well-paying freelance work (and thus making room for the waiting pile to come), I decided to treat myself by wandering over to She Said Boom! on Roncesvalles to exchange cash for cultural product: Great Short Works of Leo Tolstoy (my old copy of The Death of Ivan Ilyich and Other Stories is in worse shape than Ilyich himself), Buster Keaton's The General on DVD (replacing a beloved VHS copy lost ages ago), and, on a whim, and because it was cheap and looked great (and, as it turns out, sounds even better), Good God! A Gospel Funk Hymnal. 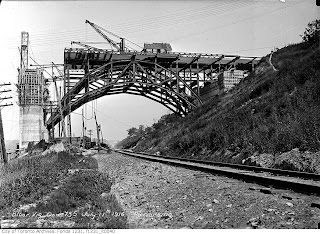 Michael Ondaatje's In the Skin of a Lion got the ribbon-cutting treatment last week, getting enshrined next to the Bloor Viaduct, the book's central symbol:

No Toronto author has done a better job of breathing life into our landmarks than Michael Ondaatje. His iconic 1987 novel, In the Skin of a Lion, tells of the lust and muscle that built Toronto in the 1920s and 1930s. An immigrant himself, Mr. Ondaatje worked up his own sweat weaving fiction and truth as he imagined the back story of such landmarks as the Bloor Street Viaduct and the R.C. Harris Water Filtration Plant.

Yesterday Mr. Ondaatje returned to the scene of his masterpiece, in a little parkette on the east end of the bridge, to unveil the first plaque by Project Bookmark Canada. The brainchild of Toronto-area writer Miranda Hill, this project aims to post pieces of prose next to geographic features all over Canada, thus inspiring us to read our stories about our landscape.

I'll just pass over "no Toronto author has done a better job of breathing life into our landmarks than Michael Ondaatje" for now, but the bit about being an immigrant writer "who worked up his own sweat weaving fiction and truth" is just plain offensive. Does Kuitenbrouwer think Ondaatje showed up with nothing but a dream, a pen, and a steamer trunk full of memories? I must have skipped the chapter in Running in the Family where Ondaatje describes the years he spent living with twelve other guys in a dirty squat near Queen and Lansdowne, eating nothing but hamburger buns and Cheese Whiz, showering at the Y, and working for a shady contractor.

Yes, he toiled in fiction's sweatshop, stitching together the prose-garments that would clothe this city in myth. He drove our storytelling taxicab, politely ignoring our drunkenness or horniness and chatting the passing streets into the stuff of legend before dropping us off curbside at the doors of literature. He washed our fictional dishes, scraping off the symbolically rich leftovers and rinsing each plate until it gleamed with new literary light.

I also have to take some exception to this:

Mr. Ondaatje, now 66, looked great in a suit jacket and red wool scarf. He posed as Mayor David Miller snapped the inevitable Twitter photograph and bantered easily with the hundreds of fans who flocked to hear him speak and thrust tattered copies of novels for him to autograph. And he embraced the project, noting that we too seldom blow our own horn.

“I remember being told when I began to write that it was commercial suicide to set a thriller in Toronto or any Canadian city, as opposed to New York or Miami or Kiev. Even Delhi, they said, was better than ­Toronto!”


* those of you who have read my novel can probably suss out my own feelings about ITSOAL.
Posted by nathan at 10:57 AM 2 comments:

My review of the M.G. Vassanji's pocket bio of Mordecai Richler in the Toronto Star.
Posted by nathan at 6:01 AM No comments:

Roy on forcing high school kids to read books they don't have a chance of understanding, much less enjoying:

If this sounds harsh -- if you think students should be inculcated with the joy of reading, rather than frog-marched through big books -- please take a moment to gather your memories of high school, and not just your own experience but also those of your classmates, as you perceived them. Then, consider: at which are schools better -- at instruction, or at enlightenment? If your mind was awakened in high school, congratulations, but chances are it would have awakened in any case, whether you had school or not. But you were less likely to have learned on your own polynomial equations, how to write a paper, historical analysis, or other such building blocks of intellectual life. I didn't want to learn these things, but I was taught them nonetheless, and I'm grateful for the experience.

As someone who barely made it through high school alive, having nearly been eaten from the inside-out by the seething hatred for the place that sat in me like a tape-worm and gnawed at me every single day I spent within its walls (forcing me, once drinking in the afternoon was a feasible alternative, to spend as little time there as possible), I have a knee-jerk reaction to the idea of being forced to read anything. (A reaction, by the way, that has only been sharpened by many long nights yawning and grumbling through yet another book under review.)

However, Roy's point – that finding something teens want is a fool's errand, so you might as well give them something they need – is a good one. There are books that went right by me during those days that never quite left me. And happy accidents happen: some people who know me are rightly sick of me relating how, in Grade 9 English, I laughed at all the dirty jokes in Shakespeare, but there it is. I still read the stuff. (And still laugh.)

Part of the reason I forced my son to watch Kurosawa movies and Grand Illusion with me back when he was barely four years old: I hoped the experience would linger. (That and the fact that I'm a selfish bastard...)
Posted by nathan at 11:07 AM No comments:

Jughead's eyes are closed, but mine are wiiiide open

Macleans has a piece on economic anxiety making it's way into otherwise ageless (and humourless) comic strips.

Hey man, I was on this one two years ago.

And I did it for free.

I knew English cooking was terrible, but...

So, after a week of respectful (nay, stunned) silence in honour of a much-missed colleague and friend, I figured it was time to get back to the usual juvenile offerings. The kind of thing Derek, to his eternal credit, would never have let me post over at Quillblog.

Found this at Sadly, No!:

PLAYBOY: In Fight Club Durden pees into the soup he’s serving and farts on the food. Do you know people who have done that?

PALAHNIUK: I know people who worked at the big hotels in downtown Portland, and yeah, they would tell stories like that. There was a kid in England — and very handsome, well-presented kid — who told me, “I work in an upscale restaurant in London, and we do things to celebrities’ food all the time.” I said, “Tell me one person.” He said, “I can’t because there are only two of these restaurants, and it’d be too easy to find me.” I wasn’t going to sign his book until he told me one person. So he sheepishly goes, “Margaret Thatcher has eaten my sperm.” I started laughing. As soon as I did, he got bold. He said, “At least five times.”

I only heard the news a few hours ago after having been away all weekend, so I am still processing this.

For now, please go to Quillblog for more about Derek.

Here's an interview with Derek from last year.
Posted by nathan at 1:09 PM No comments:

Granted, this is minor political journalism silliness, but I had to laugh at this, from Saturday's Toronto Star story on Christine Elliot entering the race to become Ontario's Tory leader:

A successful lawyer and mother of 18-year-old triplet sons, Elliott has styled herself as a centrist in the campaign, in a move her strategists confide is their best path to victory. [emphasis added]

Oh jeez, I hope those strategists don't get into trouble for confiding that!

Later on, they "confided" that she was for lower taxes, better schools, faster cars, cuter children, cheaper coffee, and yummier cookies.
Posted by nathan at 9:48 AM No comments:

I was ready for rain.

I was ready for snow.

I was ready for wind.

What I was not ready for, was millions of jagged pebbles of ice being flung into my face the entire ride to work.

I mean, I am used to wincing the entire bike ride to work, but that's usually out of guilt and shame...
Posted by nathan at 6:30 AM No comments:

Oh yeah, uh... Something That Is Blatantly Untrue!