A Week of This in Canadian Notes and Queries

AWOT gets a hella good review in the new issue of CNQ:

It’s nearly impossible to explain how technically accomplished, nuanced, fully-felt, and flat-out-fine a book A Week of This is without having praise sound laborious and monotonous. Whitlock’s prose is unassuming but never boring, stripped of any flourishes that would alienate his characters from the voice describing them.

(I don't know about never boring, but hey - different strokes)
Posted by nathan at 10:49 AM 1 comment:

Werner in the middle

I caught the last half of the Herzog interview on CBC's Q the other day, and quite liked his reply to Ghomeshi's suggestion that he was an outsider. He very politely (but very firmly) disagreed, saying he is "in the centre," and that the culture around him was what was "bizarre." He made clear he wasn't being puckish, but was sincere ("I don't zink ziss, I know ziss."), and noted that whereas Kaiser Wilhelm supposedly defined his own era, it was the completely unknown and marginal Franz Kafka who truly did so. (Though he quickly followed that up by saying he was not comparing himself to Kafka. Or Wilhelm, for that matter.) He also noted that Aguirre, the Wrath of God, was once voted the "Worst Film of the Decade" in Germany. (He makes some of the same comments here.)

It made me think of something someone wrote about The Filth and the Fury (which is a surprisingly sad film), something to the effect of the young Sex Pistols looking utterly normal and sincere next to all the unctuous TV chat hosts and moral majority figures who spent so much time baiting them.

This can be a temptingly self-serving view for any artist - and anyone - to get ahold of (yeah man, I'm the normal one - they're all insane), but you find optimism where you can.
Posted by nathan at 6:25 AM No comments:

You know, Christmas is coming.... 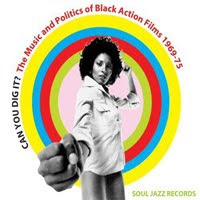 ADDED: "Across 110th Street" is one song that neither working for years in restaurants with hipster bartenders nor Quentin Tarantino himself was able to kill the joy of for me. (It helps that it appeared in what I still believe is Tarantino's best movie.)
Posted by nathan at 7:02 AM 1 comment:

The concert sounds good, but I really wish people wouldn't write about Dylan this way:

It isn’t that Dylan has magical powers or that he is laying hands on paralyzed people and enabling them to walk again. It is that perhaps more than any other living performer, there are such mythic investments placed within Dylan, and amazingly he manages to live up to them. His stage is a rare setting where myth and reality seem to meet. They dance together to the tune of rusty blues guitar. The razorblade-throated singer tightens their entanglement by documenting outlaw population groups who are submerged from the greater polity, and respond with a spirituality that is stoked in the fires of hell and ready to burn the unrighteous.

That last sentence makes no literal sense. (And don't say, "Neither does Dylan, man...")

Speaking of Dylan, here is the latest in the grand tradition of "Songs that sort of rip off 'Subterranean Homesick Blues'":

I like the song a lot – it's kind of what I wish all those nü-ska bands from the 90's had been more about instead of jackboot-rhythmed, frat-friendly raids on old Madness and Specials albums. I'm still listening to VW's first, despite my initial suspicion that I'd get sick of it PDQ. And the kids still ask for it in the car. (As they do the new Dylan Xmas album, oddly enough.)
Posted by nathan at 6:18 AM 1 comment:

May all your Christmases be white, says Mark Steyn

It just wouldn't be Christmas without the man with the beard. And by that, of course, we mean... Mark Steyn. For the past couple of holiday seasons, Steyn has taken a break from making giggly and not-at-all-revealing gay jokes and warning us of the impending Muslim baby-tsunami that will wipe out all that is good in this white, Euro-derived world (things like show tunes and the National Review) to squeeze out a yule log in the form of a CD of holiday songs, co-sung by the man himself. 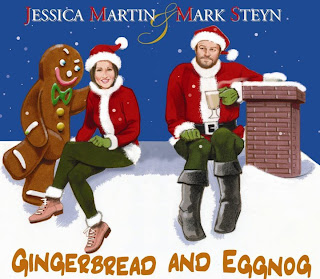 (And no, that's not Photoshop.)

He doesn't completely leave commentary behind, though. I mean, just look at how that swarthy, non-Xtian gingerbread man is leering at that innocent white women. He wants to make her one his virgins! Steyn may be off to the side, cramped up from all the 'nog, but you can tell by the steely look in his eye that as soon as he gets this last steamy cup in him, it's gonna be on.

And note that his previous collection of reindeer droppings was entitled A Marshmallow World. What colour, pray tell, is a marshmallow? There's nothing wrong with dreaming of a globe that is pale all over; after all, you just know those bearded fanatics – you know, the ones that hate Western-style civil rights and freedoms and seek to replace our systems of government with brutal, lawless, authoritarian theocracies... no no no, the other bearded fanatics – you just know those guys are hunkered down in mosques in Iran and Brooklyn, dreaming of a Hot Chocolate World. (Hot as in explosions! Praise Allah and pass the turkey!)

So we need someone like Steyn, sitting on guard next to the chimney. Cuz who knows might come down it?

(Those tights and boots, though – they seem a little, mm, flamboyant, don't you think, Mark?)
Posted by nathan at 6:34 AM 4 comments:

Being in something like the second trimester as far as this new novel goes, and having to keep all the other balls in the air and dishes spinning, I've been even more out of the loop, Giller-wise, than usual this year. It's not an unpleasant feeling, by any stretch, especially since the toe-dipping I did do with some of the shortlisted books often left me shuddering and/or despondent. (Even more so than when I read my own book-in-progress – and that's saying something.)

However, I did get to hear Linden MacIntyre read from this year's winner a couple of weeks ago, and had to admit it sounded solid and readable. (Usually when I'm at readings I just let my mind unhook and float around the ceiling for a quarter of an hour until the author says "thank you" and walks off.) Plus I chatted with him later on at a party, mostly about the despair our respective mothers have expressed over all the swearing in our respective books.

So I don't feel any particular angst over his win, and even sense a most unusual feeling creeping over me: pleasant surprise.

(And if that wasn't the most miserly congratulatory note you've ever read, I'll eat my hat...)
Posted by nathan at 7:48 PM 1 comment: 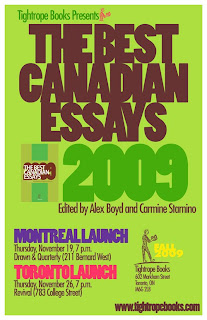 I'm in this thing ("best" being a relative term), and will be reading aloud at the Toronto launch, so won't you come and listen?

There'll be booze, laughs, and trenchant insights for all.
Posted by nathan at 9:39 AM No comments:

Read my list at the Atlantic Canada's 100 Greatest Books site.
Posted by nathan at 6:49 AM No comments:

It’s very, very late in the day to make a fuss about Bob Dylan’s voice, though whole flocks of second-rate comedians and online jokesters are still making damp hay about it. At this point, nearly a half-century into the man’s singing career, pointing at that Dylan’s pipes lack the range of Judy Garland and the sweetness of The Beach Boys is not exactly going to set the collective jaws a’dropping. Notions of “authenticity” in pop music are often only reductive, snobbish constructs, but there is a kind of music lover who, in part thanks to the work of Mr Dylan, both as a singer and as a lifelong proponent of oldey timey music, prefers a throat full of frog than a velvet fog.

But still: even full acceptance of Dylan’s characteristic croak and whine can be strained. Personally, I could never take the sneezy nasality of “Lay Lady Lay.” I’d rather he shouted the thing in my ear in a fake German accent than whistle it, as he did, through one nostril. Thankfully, he rarely went there again.

Lately, he has been settling into a kind of growl/grumble that suits perfectly the jumped-up country blues he’s been sitting on for the past few records. The early reediness had given way to something closer to Joe Cocker or Tom Waits. If you occasionally feel like sucking on a Lozenge a few tunes in, that’s a small price to pay.

And then along comes Christmas in the Heart, Dylan’s new, 100% un-ironic collection of yuletide tunes, and all of a sudden, the man’s voice has become a question again....

An Open Letter to Yann Martel

My sort-of review of Yann Martel's What is Stephen Harper Reading? in the Toronto Star.

(For the curious, here's my original take on the whole thing.)
Posted by nathan at 4:27 AM 1 comment: