Given that Mark Steyn has called Canadian men a bunch of health-cared, gun-controlled pansies ("Whatever its other defects, Canadian manhood does not suffer from an excess of testosterone") because nobody shouted "Bring it on!" and wrestled that violently unhinged Muslim Marc Lépine to the ground, you might wonder what he thought about the fact that the passenger who subdued the violently unhinged Muslim Umar Farouk Abdulmutallab was Dutch.

The last time a Dutch filmmaker encountered a jihadist face to face he said "Can't we talk?" and was rewarded with eight bullets, near decapitation, and a crowing note from his murderer skewered by knife through his chest. By contrast, Mijnheer Schuringa jumped on the guy, got him in a choke hold, and dragged him away.

Something tells me Mark has been privately recreating this scene in his basement, with him as Schuringa and an upstanding local lad who is working his way through college (and who greeted Mark at a nearby park with the offer of some company) playing Abdulmutallab.

In my mind, both of them are in Speedos. ("Let's see who's the first to detonate their concealed incendiary device...")

Schureeeeeenga!
Posted by nathan at 6:00 AM No comments:

Welcome to our world

Try and guess what country Jeffrey Simpson is writing about in his Globe column:

Bubbling beneath the surface, therefore, are significant elements of [...] society fed up with their government, embarrassed by its foreign policy, and angry at its authoritarian ways. The dissident citizens are mostly young, urban and educated; the regime's supporters are mostly old, rural, poor and badly educated. Exceptions, of course, would include the business people who get rich on government contracts, and those employed in the various security services and the pro-government press or ministries.

(See here if you were right.)

We have the makings of a Christmas soccer truce here.

"Your country's political culture is ruled by authoritarian assholes supported by ignorant rednecks and greedy oligarchs? So's mine! Shirts versus skins!"
Posted by nathan at 1:59 PM No comments:

The Original of Laura by Vladimir Nabokov

My review of the Nabokov's unfinished novel in the Toronto Star.

If there is one word, one theme, that runs through all of Vladimir Nabokov's work, it isn't "beauty" or "sublimity" or "bliss" or any of the other possible candidates that might be offered up by his most ardent admirers (and almost all of his admirers are ardent).

Rather, the one word is "control." His fiction was supremely, proudly inorganic, every inch of it hostile to the idea of the happy accident or the free-willed character.

"Even the dream I describe to my wife across the breakfast table is only a first draft," he wrote in the foreword to Strong Opinions, a 1973 collection of his letters, occasional prose and interviews.

With an artist who is so defined by his own sense of control, there is a strong postmodern urge to get a look behind it, to catch the master in his underwear and find the vulnerable, beating heart beneath the aesthetic arrogance. The Original of Laura seems the perfect opportunity to sample that most improbable item: raw Nabokov. The novel – more a series of scenes, sketches and notes toward a possible novel or novella – was a work in progress at the time of the author's death in 1977.

Read the whole thing here, if'n you like.
Posted by nathan at 11:58 AM No comments:

Contrarian-sounding (but sincere) thoughts about films that have been out for a while: war movie edition

Inglourious Basterds is a an unhinged and unholy mess, but an astonishingly entertaining and gripping unholy mess. It just about makes up for Kill Bill.

The Hurt Locker, meanwhile, has its moments, but is ultimately brought down by a terrible pacing, a go-nowhere and implausible story, and deeply clichéd dialogue and themes.
Posted by nathan at 8:03 AM No comments:

I have an opinion piece about the attempts to create literary-commercial hybrids in this country in the new issue of Maisonneuve.

Here's what a literary hullabaloo looks like these days: In its July/August issue, Quill & Quire magazine (full disclosure: I work there) ran a feature review of Lori Lansen’s The Wife’s Tale by author and Q&Q contributing editor James Grainger (full disclosure: he’s a friend). The review was mostly positive, praising Lansen’s “knack for satisfactorily ending one scene while creating anticipation for the next” as well as the novel’s “irresistible narrative thrust and character arc.” Grainger did find fault with the characterization, but concluded that, given the kind of book it is—i.e., mainstream and commercial—and given the intended audience, it wasn’t a big deal, and maybe beside the point.

In short, it was a review most authors would kill for.

However, Grainger made two errors. The first was getting some incidental facts wrong about the film rights to Lansen’s previous novel, a mistake duly noted and corrected when the review went online. The other blunder was a little trickier: by grouping the novel with the “big-hearted and story-driven” tales that tend to be favourites of book clubs, Grainger committed the Sin of Distinction, one that cannot be washed away by subsequent praise.

In the print issue, the piece is accompanied by a caricature of me that looks like a 14-yr-old Caillou. Such are the wages of critical sin.
Posted by nathan at 7:56 AM 1 comment:

Marcus Gee, on the Toronto doctor who has allegedly been helping welfare recipients top up their meager cheques by approving their dietary allowance forms:

It's a modern version of sticking it to “the man.” Your employer isn't paying you enough so you raid the supplies cabinet or take a sick day when you are perfectly well. The store is charging too much for jeans so you slip a pair in your backpack without paying. The store is rich, after all, and you are poor. You are entitled.

Quite right, Gee. Poor people using a loophole to get almost enough money to survive is exactly like someone shoplifting jeans.

In other words, the ends justify the means. If people are suffering and claiming a diabetic condition can get them more welfare money, why not help them claim it? The trouble is that dodges like that undermine the whole welfare system, reinforcing a public suspicion that people on welfare are out to fleece the system.

Oh no - people in this province might start thinking badly of welfare recipients! In other words, it's all about not incurring the wrath of the fat assholes who think all poor people are lazy schemers. Not to be too class war-ish about it, but why is it that corporate execs never worry about all this "public suspicion" when it comes time to offer themselves bonuses or write off every expensive little perk at the taxpayer's expense?

Keep in mind, too, that Gee, in his past few Globe columns, has defended the sneaky and possibly illegal billing practices of the owners of the 407 and railed against the proposed new billboard tax (billboard putter-uppers being some of the more flagrant and visible bylaw-breakers in our fair city). He has also, as far as I know, had nothing to say about the notion of Toronto police hiring themselves out as human traffic cones.

Gee's Law: It's only cheating when it's done by someone less powerful than you.

It's not online, but my interview with Julie Powell (Julie & Julia) is in the current issue of Fashion. (In the "Culture" section, where else?)

Most of the interview concerns her new memoir, Cleaving, which recounts the huge pit her life fell into a couple of years after her year of cooking according to Julia Child. There's infidelity, sex with strangers, unhealthy obsession, and a whole lot of butchery. It's a long way from the tone of the first book and, especially, the movie, which I had to actually pay to see after arriving at the press screening five minutes late. About 20 minutes in, I decided they ought to be paying me to sit there. (Though Streep is fun to watch, etc etc.) She's mostly careful about it, but from her comments to me (many of which are in the article), I get the feeling Powell's not a huge fan of the movie, either.
Posted by nathan at 3:52 AM No comments:

Bibiane, you can drive my car

From a profile of Chantal Kreviazuk in the TO Star:

The performer, who showcases her fifth album at Massey Hall on Tuesday, gets professional satisfaction writing hits for other performers, having her songs placed in movies and television, touring Canada every few years and lending her stature to humanitarian efforts.

As advocates of War Child Canada, which assists children affected by war, she and Maida walked the talk with the hiring of their nanny of six years, Bibiane Mpoyo of Burundi.

Charity begins at home, they say. What better way to demonstrate your firm commitment to an issue than to hire someone affected by it to do menial labour? I have friends who need some landscaping done - anyone know any Somali refugees?

"Living with a war refugee is really intense, it's a risk every day," said Kreviazuk. "And there are days where something inappropriate happens. It's not age appropriate, or I know that she can't leave what's happening back home at the end of the canyon on her way into our house. There's a lot of understanding and patience that has to happen, but what she brings into our lives couldn't be without her experiences and we're gaining something far more valuable than what is being risked."

Yeah, Bibiane can be a bit of a pain now and then, what with the sensitivity to loud noise and the "boo hoo, my whole family was butchered before my eyes!", but hey, who doesn't get a little emotional at the end of an 18-hour day?

Honestly didn't know this was coming: 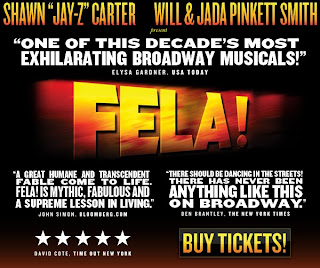 Don't know what's stranger: that it exists at all, or that Jay-Z and Will Smith (as well as Jada Pinkett Smith) are putting up the money. It was usually the Mos Def and Common end of hip hop that jacked Fela's (afro)beats.
Posted by nathan at 1:59 AM No comments: