Below is the web trailer for A Week of This. All of the footage is taken from the film loop Ian Daffern made for the Toronto launch – chopped up, re-ordered, and played out over a plinky little tune I whipped up on a laptop. (Macs are wonderful things.)

Too much of a good thing

Based on this review of his new one, it would appear James Kelman has not yet lost the habit of writing novels you really want to like and that are intermittently brilliant but that are just too frigging long and loose to really work. (I'm still curious to read it, though.)

Here's my review of Kelman's previous novel, You Have To Be Careful In The Land Of The Free, from way back in 2004.
Posted by nathan at 8:57 AM No comments:

Confucious say: what were they thinking?

A rather unfortunate juxtaposition of story and image on the front page of the Toronto Star this morning:

You can juuuuust see that "Sinophobia" story on the right, which is what the image actually refers to.
Posted by nathan at 10:22 AM No comments:

I have a thing in the Globe T.O. section today about a recent night out at The Rehearsal Factory.
Posted by nathan at 3:55 AM No comments:

Getting fried with Mr Frye

It's been a long while since I've had Northrop Frye over to guest blog (see here and here), so we're long overdue.

What's he on about this time? Why, gettin' loaded, of course:

For the relaxations of the spirit which is wisdom some kind of narcotic is essential, I think. It disturbs routine existence enough to suggest the infinite. Teetotallers are often cultural go-getters & over-rationalized. Their rhythm is all wrong. In the Middle Ages everybody was stewed in beer all day long.

Who the fuck steals a ten-year-old's new bike?

There is indeed evil in the world.
Posted by nathan at 5:47 AM 1 comment:

My review of Reinhold Kramer's Mordecai Richler biography here.
Posted by nathan at 4:49 AM No comments:

The launch for AWOT went smoothly, I think – the room was crowded, the books sold out, and people seemed to enjoy it.

The piece Alex composed (and performed) was odd, spiky, hypnotizing, and way beyond what I would have settled for. I would have been happy with entertainment, and the fucking guy brought music – which is why I love his stuff.

Ian Daffern’s film loop was even more hypnotizing – we may be doing something more with it.

I was glad to be able to thank certain people who helped out, and I’m glad the books sold – not only for my own egotistic purposes, but because Chris Reed and Pages put so much into this event, I didn’t want to lay an egg. I was especially glad that I could publicly thank Phil Rudz for the fantastic cover he made for the book. I’ve heard that people were getting him to sign the cover, which is at it should be.

Everything from now on is gravy, as far as I'm concerned. Some dork and his Powerpoint presentation: 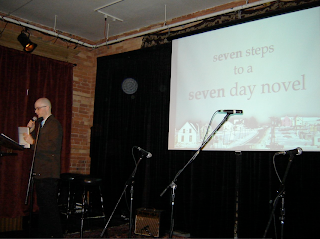 Thanks to all who came out.

ADDED: More photos here.
Posted by nathan at 11:30 AM No comments:

If you're looking for me tonight, I'll be the one puking at The Gladstone – in panic, before the event, recreationally afterwards.

Pickle Me This goes firm but fair on the book.

I especially appreciate this:

Manda is a great character, altogether realized. She's mean, which I appreciate – I don't find nearly enough mean and sarcastic heroines in books who we're still meant to like.

AWOT in the Winnipeg Free Press

A Week of This just got reviewed in the Winnipeg Free Press.

And don't forget: the big launch is this Wednesday, 7 pm, at the Gladstone Hotel in Toronto.

I've also got events coming up in Montreal, Ottawa, and beyond. (Plus more Toronto readings.) See here (under "News") for more events.


ADDED: if you haven't seen the window display at Pages Books, see below (courtesy of Chris Reed, who took the photos). 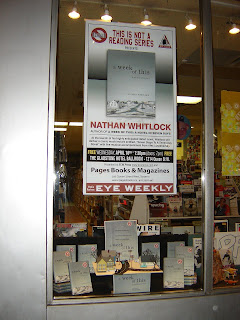 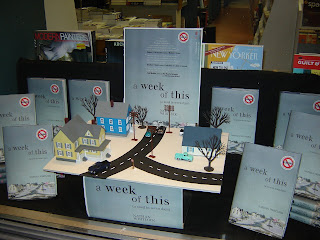 Overheard in the Eaton Centre, yesterday:

Older man, talking on a cell phone: "I try to respect all points of view and people's opinions, but not when it's coming from those bastards."

It was like my conscience was talking.
Posted by nathan at 10:27 AM No comments:

Interview in The Danforth Review.

Plus a short piece about waiting to run the review gauntlet on the Pages site.


(Thanks to Shawn and Shaun for these.)
Posted by nathan at 4:20 AM No comments:

You'd have a hard time finding sang that is froider than this letter to the editor in today's Globe and Mail:

Now that Charlton Heston is dead, perhaps it's time to pry the gun from his cold, dead hands. - Peter Dawson, Halifax

Look what the cat dragged in: 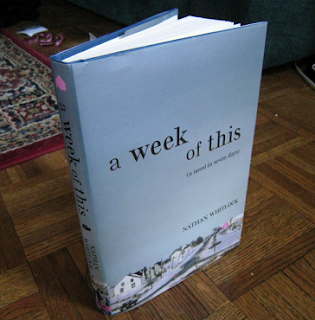 Bookstores should start getting copies in stock around April 12th. Pages at Queen & John will have copies earlier than that, I believe. (And they will soon have a window display for the book – go see it if you can.)

Also, for the next two months, the Revue Cinema will be running an ad for the book before every movie.

A million thanks to everyone who helped to make this book happen, most especially Michael Holmes and everyone at ECW Press, Ciabh (my goodwyfe), Phil, who did the cover, posters, ad, and much more, and everyone else who helped, offered advice and support, or just generally helped me on my way, most of whom I remembered to thank in the book itself.


ADDED: The Library Journal review is now online. (Scroll down.)
Posted by nathan at 9:35 AM 8 comments:

Congratulations to Rawi Hage on the IMPAC shortlisting.

In the Toronto Star, the headline for Hage's IMPAC nod is:

Canadian up for $160K Prize

There's a whole lotta national and cultural anxiety packed into that little five-word hed.
Posted by nathan at 9:19 AM 1 comment:

Me talk pretty one day

A brief Q&A for the "Fiery First Fiction" promotion, which is based on the notion that first works of fiction can induce either aneurysms or explosive diarrhea, I forget which.

(I tried not to let the thing devolve into a series of one-liners, but only partly succeeded.)
Posted by nathan at 6:32 AM No comments:

Things have been getting awfully high-minded and literary around here, so we are overdue for some good, clean smut.

Unfortunately, this is neither good nor clean:

Jewish groups condemned the behaviour of Mosley, 67, whose father, Sir Oswald, was the leader of the British Union of Fascists and a friend of Adolf Hitler.

Mr Mosley was caught on video by the News of the World with five women in an underground “torture chamber” in Chelsea, where he spent several hours allegedly indulging in sado-masochistic sex.

The Oxford-educated former barrister, who is president of the Fédération Internationale de l’Automobile (FIA), reenacted a concentration camp scene in which he played the role of both guard and inmate.

Speaking in German and brandishing a leather whip, he beat the women after allowing himself to be subjected to a humiliating inspection for lice and an interrogation in chains. [Emphasis added, maybe unnecessarily]

Really? The Nazi angle wasn't creepy enough so he had to add a lice check? This is the point where most people would look at their genitals and say, "you know, I'm starting to think I shouldn't listen to you so much."