Here's the interview, if you're curious. It's showbiz.
Posted by nathan at 9:30 AM No comments:

The angel-voiced and extravagantly coiffed Dolly Parton – whom I interviewed last week for Maclean's magazine (not sure yet when it will be published) – seen here in a long-ago performance (with Porter Wagoner) of one of my current favourites:

Anne Michaels has an essay in The Atlantic on... reading, or... culture, maybe... books?

Tense up your buttocks, Gentle Reader, we’re going in:

It is the most obvious of observations, that as humans we are entangled—by intimate experiences such as parenthood, death, love, and by commerce, culture, politics. And today we are entangled as never before—by the global consequences of our actions, small and large.

She’s right: that is the most obvious of observations. No worries, though, she can easily save this opening from banality with a novel metaphor.

A dolphin in captivity is taught tricks to please a human audience and then, once released, teaches these skills to wild dolphins an ocean away.

Amazingly, this has been documented. (Though, if you think about it, humans have been doing this for a while. We’re Number One! We’re Number One! Suck on that, dolphins!) Fucking with nature almost always has hidden repercussions, but in this case, the idea of trained dolphins teaching tricks to wild ones is fairly cool. Though it’ll be a real pisser when they realize that beach balls and “Danger Zone” by Kenny Loggins do not exist in nature.

And now, of course, another entanglement: in the local high street of the Western world, in the length of two blocks, about a minute’s walk from home, the shopkeepers come from everywhere—Italy, Estonia, Mexico, Thailand, Britain, India, Germany, China, France, Sri Lanka, Trinidad, Spain, Poland, Jamaica, the Czech Republic, Japan, Greece.

That’s a minimum of 17 shopkeepers of different backgrounds in a single two-block stretch. Imagine what that “local high street” looks like during World Cup.

At the local milk-mart, the man behind the counter reads Goethe’s Faust in Korean.

Yes, and the butcher reads Robert Burton’s The Anatomy of Melancholy in Farsi, the cobbler reads Tolstoy’s Anna Karenina in Swahili, and the haberdasher reads the complete works of Virginia Woolf in Cree….

Somehow, I think they’re all reading the Toronto Sun. Or The Da Vinci Code.

When one is dispossessed of everything—home, country, landscape—what is left?

Oh. Well, if ye ain’t got nothing, says Anne, ye can always have a talk, have a think, or have a wank.

I’m not feeling so good, myself.

We are marinated in our childhoods, in the places of our earliest memories.

Even when a writer decides never to write overtly about his childhood—perhaps the food of that childhood is too hot and burns the tongue, or is too cold to be eaten with pleasure—nevertheless, for a writer, it is a metaphorical meal that must be eaten, even if only in private.

Thus are the meals of our childhood preserved in the Tupperware of memory, burped by emigration and displacement, left at the back of the fridge by time and loss, until served up, with most of the moldy parts cut out, by internationally celebrated literary novelists.

In Canada, we have been politically stable enough to be able to define a national literature by way of geographical region: Arctic, prairie, east and west coasts, the looming wilderness. In some sense, this definition has not changed. Two great themes weave through our literature—our relationship with the wilderness, and the immigrant experience. These themes were combined even in the beginnings of published writing in this country, and this continues.

Who said Canadian literature was predictable?

I heard a comedian once say that all British humour can be reduced to “Toilet” and “Royalty.” Which sounds like an infinitely more interesting basis for a culture.

On the other hand, I plan to start a band called “Wilderness and the Immigrant Experience.” We’ll never play a single show – okay, maybe a Writers’ Union general meeting or two – but we’ll all buy ourselves houses with the proceeds from our many Canada Council grants.

The changes now, in global influence and global consequence, in a global witnessing, will of course change what there is to say, and how we say it.

We’ll have to say “global” a lot more, for one thing.

But will it change how we read? What will a national literature mean to a society that reads globally with ease, absorbing novels online and downloading instant translations of books?

Kids today, with their online absorptions and instant translations…

Despite the new ease with which we cross borders and enter the experiences of others, some truths will not change: love finds us wherever we are, a child is born in only one place, the ground where we bury our dead becomes sacred to us; these places do not belong to us, we belong to them.

And that which is thrust heavenward, must soonafter return to the rocky ground from whence it came. What goest around, does surely comest in that same direction, with time.

And where does a writer metaphorically wish to be laid to rest? In a book, in a reader.

Were these Frank McCourt’s last wishes? Because I’m not sure that’s even hygienic.

Actually, Anne, none of what you’ve written here can be considered a new idea. Except the for the dolphin bit – again, that’s pretty cool.

A national literature is made not only by writers, but by readers. Recently, a project was launched in Toronto to “bookmark” the country; passages of Canadian literature, set meaningfully in real locations, will be commemorated in those actual locations. We can cross an ordinary bridge or an intersection and read a passage describing a fictional event that takes place where we stand. Where we stand, there is a story. And perhaps that is the simplest, and most privileged, definition of what a national literature is.

You remember that one, don’t you? Methinks Anne is looking for some plaque action of her own.

And what makes a reader for words is a home; and what reads words for a home is a make; and home readers make what a is.

When the dead cannot be laid to rest in ground that remembers them, sometimes literature is the only grave we have. And that grave is one way a migrant claims a place in his adopted country—a place, ironically, for the living.

“Sometimes literature is the only grave we have” – and people say I hate books…
Posted by nathan at 8:46 AM 5 comments:

The one where I interview Chandler

The new issue of Fashion magazine has an interview I did with Chandler Burr, the New York Times' perfume critic and the author of a brand-spankin' new novel about Hollywood and book clubs and Jewishness and acceptance.

(It's not online, but you can see the table of contents here.)
Posted by nathan at 3:23 PM No comments:

The Jay-Z/Game beef from a foreign policy perspective. Seriously.

It's a bit like reading an analysis of what a given pro wrestler "needs to do" to get back on top (when the answer is always "follow the script, tight pants"), but it's fascinating nonetheless and an efficient time-waster.
Posted by nathan at 5:08 AM No comments:

My deskmate Steven "Dubya" Beattie (who often plays the Felix Ungar to my Oscar Madison, or the Frank Burns to my "Hawkeye" Pierce, or the Chip to my Dale - anyway, he's clean and I'm messy, he's careful and I'm sloppy, he takes his job seriously and does it well while I spend most of my time thinking up dirty puns for headlines) has an essay in the new issue of Canadian Notes & Queries about the fiction of Anne Michaels Ondaatje that mines a bit of potty-mouthed anti-literariness from my novel for it's title, and quotes the source to boot.

Give it a read here.

(By the way: the Patrick in my book is not named after the Patrick in Ondaatje's. I didn't even notice that until the book (mine, that is) was already written.)
Posted by nathan at 4:14 PM No comments: 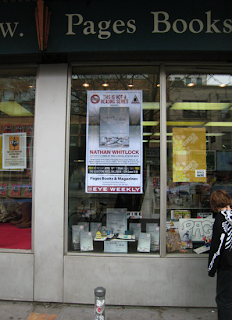 Posted by nathan at 5:14 PM No comments:

I'm amazed these guys are still at it – and in exactly the same way they were twenty years ago:

They've mostly dropped the Sonic Youthesque atonalities for guitars that roar clean a la Neil Young, but that's what getting older will do to you. (Even if it doesn't seem to be doing it to, well, Sonic Youth.)

This sound hasn't really been my thing for a while now (as far as "comebacks" go, I was more excited/intrigued by the new DOOM and the new Mos Def), but I've been listening to Farm a lot lately, almost without meaning to. There's not a single moment on the record that will come as a surprise, but for some reason, they pull it off. It's the post-rock equivalent of AC/DC, if the AC/DC were still able to do what they do with some dignity, which they mostly don't. (Except for live, or so I've been told.)
Posted by nathan at 7:01 AM No comments: