So, why are we in Afghanistan again?

Afghanistan's President, Hamid Karzai, has signed a law which "legalises" rape, women's groups and the United Nations warn. Critics claim the president helped rush the bill through parliament in a bid to appease Islamic fundamentalists ahead of elections in August.

In a massive blow for women's rights, the new Shia Family Law negates the need for sexual consent between married couples, tacitly approves child marriage and restricts a woman's right to leave the home, according to UN papers seen by The Independent.

Hiding Man: A Biography of Donald Barthelme by Tracy Daugherty

My review of the new biography of Donald Barthelme in the Toronto Star.
Posted by nathan at 6:57 PM No comments:

Why didn't they use The Troggs?

The trailer for Where the Wild Things Are just got hoisted onto the hinternet:

Movies based on picture books are a dubious proposition, as plotting them out to a full hour and a half inevitably leaves lots of room for the insertion of lessons that weren't there, and that even contradict the spirit of the original. The big one for me will always be Shrek, which took a great little story about an unashamedly nasty and obnoxious troll who stays nasty right to the end, and added in a whole bit about friendship and loneliness and being misunderstood and blah blah blah. The movie wasn't a complete horrorshow, but it was a pretty distant cousin to the book.

Already from the trailer above, it looks like Max is set up as a Lonely, Imaginative Boy With Problems. Which is fine, I guess, and it's not like some fine filmic hay hasn't been made from that premise, but in the book he's something of a little shit. That's the point. He acts up, gets punished, finds a way to turn his punishment to his advantage, has his fun, then gets homesick and hungry. Here, he looks like he's just looking for a big, furry friend.

Other than that, though, it looks great – I'm a sucker for the Henson-style man-in-puppet-suit method – and if they have avoided using Robin Williams or Seth Rogen or someone to voice said big, furry friend, it may end up being a good one. Either way, I'll be seeing it with half-pints in tow.

(And the fact that Dave Eggers co-wrote the screenplay doesn't worry me at all – he's already a schmaltz-meister, so this is probably a better fit for him than fiction.)
Posted by nathan at 6:30 AM 1 comment:

Just an update on some places where I've been paid to string sentences together lately:
I've also recently joined on as the fiction editor for Driven magazine. Since Gary B. (the pun-happy editor I referred to a few posts back) took over last year, the magazine has featured original fiction from Andrew Pyper, Kenneth J. Harvey, and Joseph Boyden. So kudos to Gary. The upcoming issue, out shortly, features a nasty little nugget from Pontypool author Tony Burgess.

(Very soon, too, Driven's web site will begin featuring original micro-fiction from authors both known and not.)
Posted by nathan at 6:01 PM No comments:

It's like something out of a "satirical" novel by a Canadian "humour" columnist.
Posted by nathan at 1:07 PM 1 comment:

Why are newspapers in trouble again?

The most prominent story on the front page of today's Star: 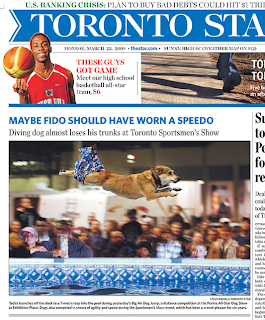 "Maybe Fido should have worn a Speedo," for a picture of a dog losing his pants.

Classic.
Posted by nathan at 12:38 PM No comments:

Happy first day of A) spring, B) the rest of your life.

Posted by nathan at 7:15 PM No comments:

Why didn't he just get out of a limo while wearing no panties?

Times are tough when the President of the United States has to schlep up to Ottawa in February just to get noticed.
Posted by nathan at 7:53 AM No comments:

Mystery and manners on the Dundas streetcar

I swear to god I watched Flannery O'Connor step off the streetcar in front of me on my bike ride to work today.

Same stern yet slightly ironic look through semi-translucent horn rims, same distressed bank of cumulus cloud hair, wearing a dress that could conceivably been made out of gingham, and carrying a library copy of The Astonishing Life of Octavian Nothing, which seemed to fit.

The only difference was that she seemed downright sprightly, compared to the double-caned lupus sufferer you see in photographs. Maybe death is agreeing with her.
Posted by nathan at 6:31 AM No comments:

The warrior and the photographer

MONTREAL – In one of his most iconic photos, Canadian Press photojournalist Tom Hanson captured a defiant Mohawk warrior – arm raised, rifle in hand, standing atop an overturned police van – during a tense standoff with police in Oka, Que., in 1990.

Remarkably, the lives of Hanson and his masked Mohawk subject, Richard Livingston Nicholas, converged again this week when they both died suddenly, in separate incidents, on the same day.

They were both 41 years old.

Posted by nathan at 4:32 PM No comments:

Straight from my lips to Mark's beard

I seem have made a frenemy. (Check the "reader of the day" box on the right-hand side.)

If it's not there anymore, here it is: The man with a movie camera

My friend Ian Daffern has started a company, Vepo Studios, "that develops and produces short films, videos and promotional solutions for the arts, culture, and publishing industries."

(Bonus: a Daffern co-production from early last year.)
Posted by nathan at 10:16 AM No comments:

Mark Steyn is a dangerous idiot with a suspiciously homophobic streak for a bearded, show tunes-loving man who is drawn to big, strong, authoritarian types.

I'm pretty sure I've made that point here before, and I know that others have made it, too, but it bears repeating.

Especially when Beardo is denouncing the month-and-a-half old Obama administration as "incompetent." And slipping in a not-very-subtle racist crack ("Barack ain't run nuthin' but his mouth") while doing so.

It's nice to see him take a shot at fellow expat-Canadian David Frum, though, which raises hopes there may be some retaliatory man-boob nurpling coming soon.
Posted by nathan at 8:05 AM 41 comments:

Commenting on war widow Mishelle Brown, Christie Blatchford has some stern words for those who would use the deaths of Canadian soldiers as an occasion for purple prose:

There wasn't a mawkish note to any of it, and in our world that is saying something, well accustomed as we are to those who believe that a feeling un-emoted, preferably in the most public imaginable way [sic], is not a feeling actually felt.

Yes, one should show restraint and dignity in times of war, and not let one's words go all sloppy in the most public imaginable way.

In this beautiful place perched atop the green Arghandab River plain, before the sun was even up Sunday over ochre-coloured stony hills, the young men of Charlie Company, 3rd Battalion, the Royal 22nd Regiment, gathered in anguished knots, clamping one another in brief, fierce embraces, consoling the most stricken with a clap on the back or a tender rub of a bent head.

Blatchford calling for greater restraint and dignity in the face of human tragedy is like a pedophile urging children not to talk to strangers. Both know full well that, were this advice heeded across the board, they'd have nothing to do.
Posted by nathan at 1:22 PM 1 comment:

The still-warm corpse of John Updike contributes a thoughtful review of a new Cheever bio to the latest New Yorker.

By sheer coincidence, I am the midst of working on a review (for the Toronto Star) of a new doorstop-bio of an author who, like Cheever, was best-known for his short fiction, was closely associated with The New Yorker, and who directly and indirectly influenced thousands of other writers, often for the worse – Donald Barthelme.

Anyone who has come within smelling distance of my own misery-soaked fiction could easily guess I am more of a Cheeverite, but I do think there is a strain of domestic melancholy in Barthelme's work that often gets overlooked amid all the funny names and narrative jiggery-pokery, and that the two writers are not quite the polar opposites they are assumed to be.

Not to mention that Cheever was more of a fantabulist than his reputation as "Chekhov with a high ball in his hand" would suggest. With some adjustments, both tonal and typographical (and maybe cosmological), "The Swimmer" could have fit into Barthelme's oeuvre.
Posted by nathan at 6:58 AM No comments: